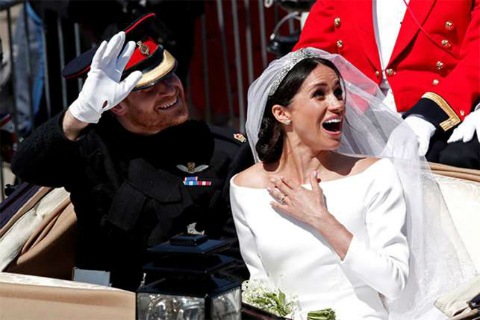 Despite the fact that the Royal Wedding took place in the early hours of Saturday morning, it still didn’t deter 29.2 million Americans from turning in to watch the live ceremony.

This fact was proved last Saturday morning as more than 29 million Americans tuned in to watch the Royal Nuptials of Prince Harry and Meghan Markle. In comparison, the audience number was at 23 million when Prince William wed Kate Middleton wed back in 2011.

In addition to leaving his elder brother behind in absolute numbers, Prince Harry took the lead over Prince Willian in household numbers as well. His wedding attracted 23.7 million households in America – compared to the 18.6 million which were attracted to William and Kate’s wedding in 2011.

The Royal Wedding not only dominated American television networks but it also ruled the roost on social media. Around 6.9 million interactions were carried out on Facebook and Twitter about the incoming Duke and Duchess of Sussex.

As for the cable networks, Fox News was a clear winner as 2.036 million people tuned in to the Rupert Murdoch-owned network to watch the Royal nuptials.

Prince Harry and American-born former Hollywood actress Meghan Markle tied the knot in a ceremony at the Windsor Castle, where more than 100,000 people lined the streets to greet them.

The wedding also included a ‘’power of love’’ sermon from Bishop Michael Curry and a dazzling ‘’Stand By Me’’ performance by Karen Gibson and the Kingdom Choir.

The couple won’t be taking off for a honeymoon yet, as they are going to attend a charity garden party by Prince Charles, heir to the throne, on Tuesday evening at the Buckingham Palace.