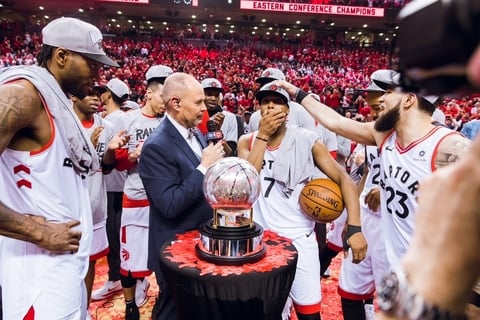 It wasn’t easy at first, but a 26:3 run in the second half helped the Raptors to win Milwaukee 100:94 in game 6 of the eastern conference finals and advance to the NBA Finals against the Golden State Warriors.

Toronto managed to get to the finals for the first time ever in franchise history. Toronto have the home court advantage in this series and will host the Warriors Thursday night.

The Bucks opened the game strong and in the end of the first quarter they led 31:18. The Raptors fought back and the half time score was 50:43 for the guests.

Milwaukee led by as much as 15 when the clock showed 2 minutes left in the 3rd quarter, but 10:0 run led by Kawai Leonard in the last 2 minutes of the 3rd, cut down the lead to just 5 points.

From then on, the Raptors took the lead and finished the game strong.

Kawai scored 27 points, collected 17 rebounds and dished 7 assists and made history by carrying the team to its first final appearance ever.

SAY IT WITH US, T.O.! #WeTheNorth pic.twitter.com/XaBWH7AQy9

SOAK IT IN, @Klow7! #WeTheNorth pic.twitter.com/T9OgLF2OHy