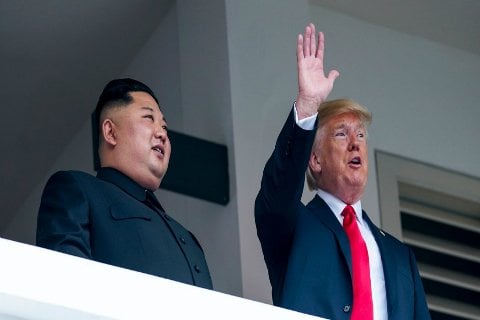 The US president has been nominated for the ultimate peace prize by a group of Norwegian politicians following the groundbreaking North Korea summit.

A group of Norwegian politicians has nominated the US President for the Nobel Peace Prize after Donald Trump held talks with Kim Jong Un in the North Korea summit.

The nomination has come from at least two members of the Norway’s Progress Party, which is generally considered left of center and is the third largest party in the Scandinavian country.

“What’s going on now is historic,” Progress Party member Per-Willy Amundsen told NRK. “A process is underway to ensure world peace in the future. It’s a fragile process, but we must, of course, do what we can to help this process bring good results.

Though the nomination has now been made, it missed this year’s deadline for the ultimate peace prize. So Mr. Trump would have to wait for until next year to be officially nominated for the award.

The Nobel Peace Prize – which was also awarded to Mr. Trump’s predecessor Barrack Obama – is considered one of the most iconic honors in the world. It is open to academics, leaders, and researches, with the scope of the nomination so broad that a record 330 people were nominated for the 2018 prize.

Mr. Trump isn’t the only world leader who has ever been nominated for the prize. For, in the past, Cuban leader Fidel Castro, as well as Russian President Vladimir Putin, were also nominated for the same, though none of them was able to clinch it.

Should Mr. Trump wins the award, he would join his immediate predecessor Barrack Obama in the list of US presidents who have received the honor.

The US President was in Singapore this week where he met with North Korean leader Kim Jong Un and thereby becoming the first sitting US President to meet with Mr. Kim. After a day of negotiations, the two countries parted way amid hopes of protracted negotiations in the coming months.